We've got a preview for a Papertrey Ink set today that is out of this world. Star Gazer and Star Gazer Additions feature constellations, zodiac descriptions, star maps, and celestial themed sentiments. When teamed up with the expanded shimmer line of cardstock, you've no doubt have a deep well of ideas to draw from when you want to create some starry themed projects of your own.

Now, I want to first say that I am not into horoscopes. Not one iota.  I'm logical and scientifically mined right down to my very marrow. And if you are alike, you might think these sets are not for you. Not true! Think of both sets as astronomy themed as opposed to astrology themed. Viola! Very scientific! There's still lots to love. And all the zodiac names? They are constellation names too:). Can't argue with that. 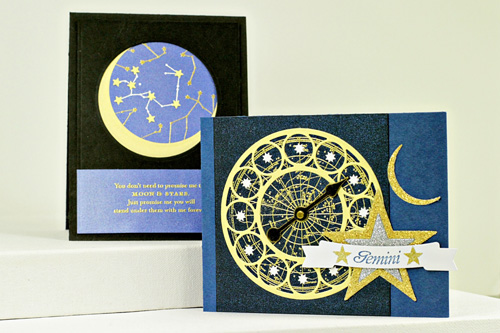 I went all in with the celestial themes, right down to the colors. Dark blue, black, gold, silver. I so rarely work with these tones that it was a treat to have the excuse. I'm guessing the other ladies might have more creative color combos to inspire. But hey, it's classic for a reason, right? Why fight it? 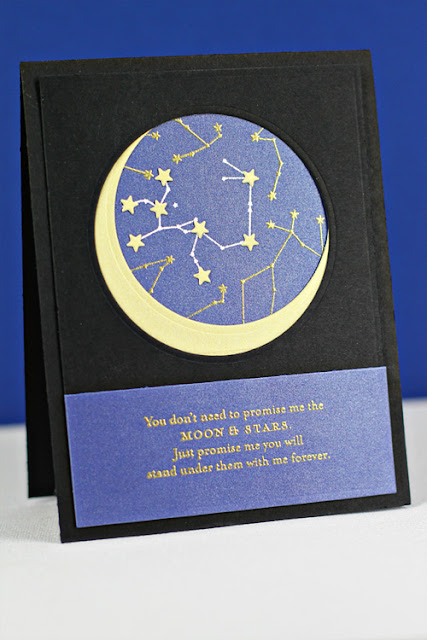 First up is a card that I cannot wait to give my husband. This is right up his alley. I stamped several constellations in gold embossing powder onto Sky Shimmer paper, leaving room for what I believe is Sagittarius in white embossing powder in the middle. I wanted one constellation (didn't matter which one really) to pop out from the others, thus why I choose white. I cut stars from the Star Gazer dies out of Gold Shimmer and adhered those onto my white constellation.

I die cut a circle out of a True Black cardstock and lay the negative piece over my night sky. My original plan was to evenly mat it in Gold Shimmer. I inadvertently stacked the black and gold panels so more of a crescent moon showed instead of an evenly spaced circle. Total happy accident! I don't think I would have thought of that on my own. 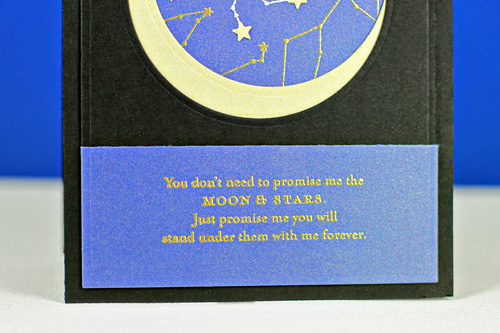 Here's a close up of the sentiment, also embossed in gold on Sky Shimmer paper. Perfect match to the focal point. 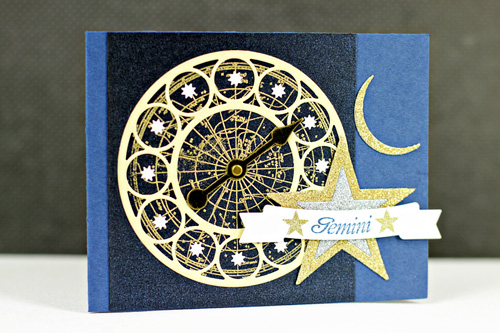 For my second card, I wanted to focus on the large circular star map found on Star Gazer Additions. Now, remember Hands of Time that was released in January? The die cut clock fits just about perfectly over the star map. I've seen many clocks that have a celestial background. An idea was born!

The map is embossed in gold onto Night Sky Shimmer and the clock, die cut in Gold Shimmer is placed on top. Instead of numbers, I placed eight sided stars die cut from Star Gazer Dies in Cream Shimmer. Seeing Star dies cut the gold and silver glitter stars (I believe American Crafts manufacturers the glitter paper) and I topped them with a constellation name on a Bountiful Banner die. A sickle moon is also cut out of gold glitter paper. Everything is mounted on an Enchanted Evening card base. The Night Sky Shimmer paper plays off so nicely against the cardstock.

I'm already planning more cards with this set. Sentiments from Star Prints and Super Stars would work awesome with it. And there are several sentiments spread out over various sets that have the words "moon" and "stars" in them that you will work well.  Lots of things to think about.

I hope you can see the possibilities beyond astrology in these wonderful sets. Great for masculine projects too.

Be sure to check out more heavenly inspiration at the following sites: