I don't have Showtime, but will be excited about the Season 4 premiere of Dexter tonight because that means it is just one night closer to being released on DVD. Patience is a virtue, or so I keep telling myself. Love that show in all its dark and perverse glory. I always have trouble admitting I like some of the more adult programming. Mostly because the more sex, nudity, bad language, and blood there seems to be, the more I like it. Good girls aren't supposed to like those types of things, right?

Awwwww... the hell with it...I'm a Carrie Bradshaw-Vampire Bill-Dexter-Big Love-Lucius Vorenus/Titus Pollo loving gal. Bring it on and I'll bring the popcorn. Don't you know it's the good girls you need to keep an eye on?

Betcha wondering about Lucius Vorenus, aren't you? Before he was steaming up the sheets with Christina on Grey's Anatomy, Kevin McKidd was the hottest solider around in HBO's Rome. Highly recommend if you like the type of television I do. Hands down the best television I have ever watched.

Here's a card I made last Halloween. Haven't given it yet. Definitely have to be selective in who you send this one out to, pearl clutchers be wary. I was compelled by my Dark Passenger to make it one night. Couldn't help myself. It's sometimes highly satistfying to take something as sweet and wholesome as papercrafting and give it an edge. Oxymoronic in a way. These two things just don't go together. 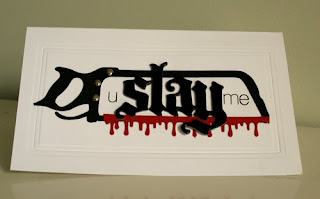 The saw is cut from this font, if you are feeling oxymoronic yourself this evening.

Off to watch Mad Men, which I'm afraid is far too high brow for me. I'll admit I have to look up the reviews on Entertainment Weekly to intrepret. Doesn't stop me from watching....after all there was blood last week. Still trying to process the lawn mower accident.
Posted by Erin at 8:48 PM