Erin vs. the Spaghetti Squash

I've been trying to eat new vegetables lately. It's where I get my excitement between diaper changes and stink bug extermination. (OMG...do ya'll have stink bugs? We are completely infested. Super mutant bugs don't die. Little armored tanks produce their own anti-freeze. Not joking.) Tried eggplant a few weeks ago in a parmesan. I found it to be too mushy, but Hank ate it like I'd been denying him food for the last 48 hours. Go figure.

Nice of me to mention bugs, mushy, and food in the same paragraph. Sorry about that. I think it and it gets typed. I have no control over it.

Any who...I have been noticing spaghetti squash recipes in my cooking magazines for the last few years and was inspired to try some when I found it for 69 cents a pound over the weekend. I was such a spaghetti squash virgin that I didn't even know how much to buy. Is it like watermelon where you have a lot of inedible rind? Or is it more like zukes where you can eat all of it? 9 pounds later, I can tell you that you can pretty much eat everything but the shell. So buy accordingly...or come get some of mine.

Matt spatchcocked a chicken the other night (it is as dirty as it sounds, raw chicken afterall) and I had some extra left. Decided to go the stuff squash route tonight. Like five servings of veggies on your plate. Balances out all those M&M's I've been sneaking from Matt's birthday stash. I literally felt my blood sugar regulate itself. Hank even liked it. Here's the recipe (from Robin Miller's Quick Fix Meals): 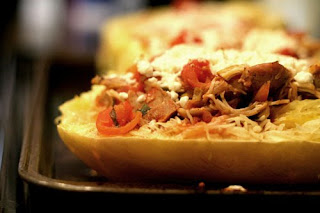 Arrange the spaghetti squash halves, fleshside down, in the bottom of a shallow microwave-safe dish. Cover with plastic wrap and microwave on HIGH until the flesh is tender, about 8 minutes.

Meanwhile, heat the oil in large skillet over medium heat. Add the chicken and cook until browned on all sides. Add the tomatos, olives (capers), basil, and oregano, bring to a simmer, and cook until chicken is cooked through.

Flip spaghetti squash over and, using fork, pull the strands from it, creating spaghetti-like pieces. Season the flesh with salf and pepper. Make a slight "hole" in the center of each squash half to make room for the chicken filling, then spoon the filling into the squash halves. Sprinkle the top of each with the feta. Transfer the stuffed squash to the baking sheet or roasting pan and place under the broiler. Broil until the cheese is golden brown, about 2 minutes, then serve.

There you have it. Go forth and cook squash. If your family doesn't eat it, throw some more feta on it:). 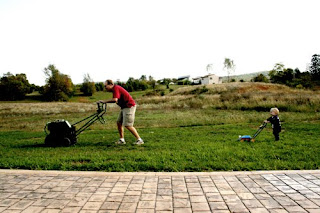 In other news, we put Hank to work this weekend. He's demanding a raise from 2 kisses and 3 cuddles to ice cream for dinner and a puppy dog. We will have to negotiate, so he's contacted his union rep and is currently walking the picket line on our front porch. I made him a sign with my Cricut.
Posted by Erin at 9:00 PM