Hope everybody out there in the blogosphere had a safe and happy holiday. Enjoying our last few days of the annual "staycation" here at home. No big plans tonight other than movie and pizza. We're easy. In the meantime, here's our Christmas newsletter. Enjoy! 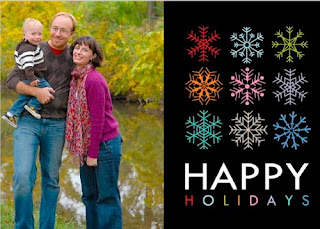 It is clear that this year, a real Christmas miracle has happened at the Lincoln household–we finally followed through on the plan to send out our Christmas letter! Nobody is more shocked than we are and we're going to savor the accomplishment because it might not come around for another four years or so. Just think, come 2014 when we send out our next one, we'll most likely have six kids, have moved (again!), both have changed careers (again!), and perhaps have relocated to Tahiti to escape it all. We sure are hoping on the last one. Chances are though, we'll be exactly where we are today–happy, healthy, and living the typical family life in Boonsboro. Can't ask for much more than that.

Matt is working his upcoming fourth full time tax season here in a few weeks. He's enjoying the challenge and learning the endless ropes that comes with the profession. He made us very proud this fall by passing the first part of his Enrolled Agent Exam, just like we knew he would. In his ever diminishing spare time he still enjoys brewing his own beer and coercing others to try it. He still sneaks in the occasional run and tinkers down in the basement trying to build his dream workshop. In July, Matt and I took our first (and looking at things, our only for awhile) child-free vacation to Lake Tahoe, CA. He learned that I really wasn't full of it when I've told him the Sierra Nevada air smelled like butterscotch from the sugar pines. He was also a bang-up kayak captain as he cheered me through a 4 mile kayak trip to Emerald Bay. While he was unable to use his shoulder for a week after that, he insists it was still worth it. I agree.

As for me, first and foremost I'm enjoying taking care of one crazy kid every day. I like to think I've settled into motherhood rather well. Of course, the kid could very much throw me a curve ball tomorrow and that could all be thrown out the window, but we like to take it one day at a time and today was an awesome one. I did lose my job for Creating Keepsakes Magazine in February. Everybody's heard the same old story about the economy, yet another casualty here. But really, the timing was perfect as the full time work-at-home gig was getting to be a bit too much of a juggle with Hank. Absolutely no regrets. In the past four months or so, I've started picking up enough freelance work to keep the brain engaged and the pocket full of mad money. Again, can't ask for much more than that.

Hank. What can I tell you about Hank? We love him to pieces. He cracks us up on a daily basis. He turned one in February and has spent the rest of the year going as fast and as furious as he possibly can. On any given day, he cons us into reading him dozens books, chases the cat around the house, completely tosses his playroom, throws half his toys down the cat door to the basement, and tries not to be disappointed when all he gets from his request for more ice cream is a lousy box of raisins. I'm happy to report that he has been a very good boy this year and will be amply rewarded when the jolly fat guy in red visits on Christmas Eve. Yay! More toys to destroy the house with...that set of 100 wooden blocks will cause lots of havoc. This upcoming year, Hank hopes to work on expanding his vocabulary past one syllable words, conquering the potty, and adjusting to being a big brother for the first time.

What was that you say? Hank's going to be a big brother? Yep, come XXXXX 15ish (*) , that's EXACTLY the promotion he'll be getting. Matt and I were completely delighted, surprised, and awestruck one Saturday afternoon to see that pregnancy test turn positive. Quite the little miracle considering we were literally waiting for our first cycle at the fertility clinic to start. Talk about a DIY project. We are probably more excited this time than the first, because we know exactly what we're getting into. Seriously, we get another kid to love like we love Hank? Sign us up!

Hoping this letter finds you all happy and well. Our wish to you is that none of the holiday calories stick to your hips, that the gift of each other on Christmas Day is the best gift of all, and that your new year starts on a relaxed and happy note.

Love to all,
Erin, Matt, and Hank

*Sorry, don't like posting my due date. We'll let that be a surprise one day. Pretty far along already. Been fun keeping it to myself.
Posted by Erin at 4:23 PM