Just wanted to share a pregnancy layout today. Trying to put a positive spin on my growing girth. Speaking of which, I have a funny story. Matt and Hank were listening to the original MIKA album when the song "Big Girls" came on. Hank looked at Matt and said "Mama?". SNORT! Hubby swears it was just a coincidence, but I know that little boy of mine is pretty darn smart. Wouldn't put it past him. 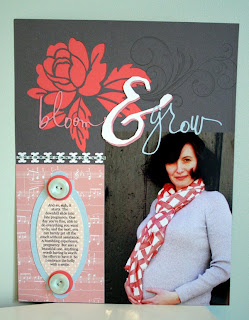 Layout was for the Silhouette blog. Find it a fun creative challenge to use certain images in ways that utilize them the most. Like this rose image. I don't want to piece it together...but backing it with cardstock works just as well and with significant less effort. All about finding the right match of image and technique. 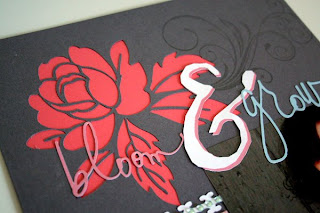 Speaking of being pregnant, I don't want anybody waiting for a baby announcement any time yet. Would be a waste of time, 'cause there's a significant chunk of time left between now and then. I have awhile and as much as I wish otherwise, it really needs to be awhile. Hank arrived by emergency c-section 5 weeks early due to preclampsia and so I'm taking it extra easy extra early this time around hoping to avoid a repeat of that nightmare. I can tell things are going to be better already. My shoes still fit and I'm still wearing my watch. This time with Hank I already looked like a water balloon and could barely fit into Matt's shoes. Never the less, I'm determined to go the distance, even if it means I plant my bum in a recliner for a month. Rough duty.

As for sex/name, we know both. And we're not telling:).Got to have some fun with it, right? FINALLY last week, we agreed on a name! Much drama in that arena. Glad that's over. What's with men having an opinion on the issue, yet not willing to contribute? All he wanted to do was veto.I'm sure you know what I'm talking about. Seems pretty universal from what I've heard.