I bought a truckload of cute onesies for Hank when he was a baby. Each one had some hilarious saying on the front that made it an absolute necessity. In fact, a goofy onesie was the very first thing we bought for baby. It said "Tax Deduction" and we bought it at Target during the two hour window we had between doctor's appointments that fateful day at the fertility clinic four years ago. Oh, we thought we were so clever seeing as Matt does taxes for a living.

Eliza has very little onesies with sayings. I think mostly because they all refer to what would be her princess attitude or diva like behavior. Yeah. I'm finding the world of little girl shopping to be a bit of a minefield. In other words, I'm into the strawberry tutus of the world, but not the fake play make up I could have bought as a birthday gift. I'm a bit erked by it all, if I'm to be honest. And secretly glad she'd just as soon go all Godzilla on his train table than she would cut her teeth on Barbie and Ken.

OK. That was a bit of a tangent. How about a cute onesie card with a saying on it? I think Truckin' It + die looks awfully cute on the new Shape It Onesie card. The saying works well too. 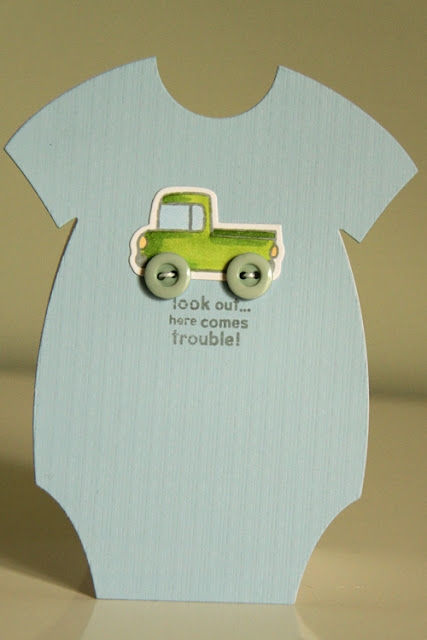 Have a nice day. I think I'll be heading to the local lake for some cooling off. My first time with both kids by myself. I think the key is to park our little party right in front of the lifeguard's chair and clad both kids with every inflatable we own. Wish me luck.
Posted by Erin at 9:46 AM