The hoards are clamoring on all the boards over the new Martha Stewart punches at Michael's. Of course I had to get my tushy into town to check them out myself. Felt extra indulgent while doing it because I went on a night I got off early from work. Hmmmm. Get home in time to help with bathtime or head to Michael's and Borders for two hours? I wasn't exactly torn apart with indecision. Nor did I phone home. It feels like more of a treat if you act like you are getting away with something.

So, there's a new concept with the stamp and punch punches by Martha. Looks like a normal punch... 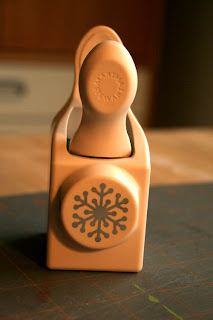 ...but the top flips off to reveal three acrylic stamps that coordinate with the punch. My heart was a'flutter. Now according to the packaging, you can use the flat top as a stamp mount, but I much prefer just using an acrylic block so I can see what I'm doing. 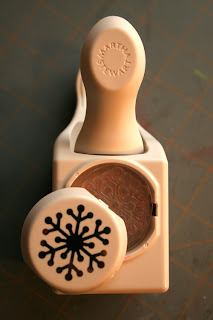 Here's examples of the three stamps stamped (bottom) and then punched out (top). I'll admit, my initial creative high fizzled quite a bit. Crappy acrylic. Made in China. Doesn't transfer the ink that well. Using Close to My Heart Holiday Red (nice quality ink) and you can see it is kinda splotchy. Conditioning the stamp didn't seem to work. Not too crazy about how they punch out either. Maybe one out of the three I'm in love with, the other two should have had more paper showing between the punch edge and the stamp. 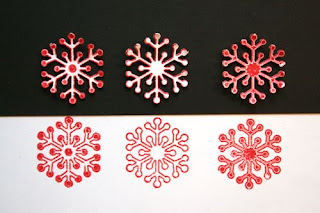 So, in short...AMAZING concept, poor execution. Just putting it out there. There are new medium, large, edger, and deep edger punches as well (one of those is on my list) and I feel those will be up to the usual standard. Also, I've never been a fan of the MS punches that emboss and cut. Those never work well for me either. Avoid those if you are thinking about it.

In other news, I was absolutely delighted to find a sequel to one of my favorite dessert cookbooks today at Target--Sticky, Chewy, Messy, Gooey Treats for Kids. I'm inspired not only to make Apple Stuffed French Toast this weekend, but to papercraft as well. Both titles have amazing styling and art direction. It's as much as a treat to peruse the pages as it is to taste the creations. Check it out if you get a chance. Target and Michael's are usually in the same shopping center, right?