I think I mentioned the other day that I moved a boatload of supplies and tools downstairs to the kitchen table. I've been feeling a bit too isolated from the family while hiding out in my office. (Although, let's be honest, some days "hiding in the office" is the only sanctuary I have in this house. I don't even get any peace in the bathroom with three little ones.) I've been able to sit down here and there and work on holiday stuff for myself while the kids are occupied.  The only goal has been to make myself happy and to enjoy the hobby.

I've been focusing on using as many supplies as possible (because it is fun!) and making holiday card sets to give away during the month of November, so that the recipients have time to use them. And in turn, I've been getting in the holiday spirit and hanging with the family.

So, hopefully, I'll have lots and lots of holiday sets to show you over the next month or so. Here's the first. 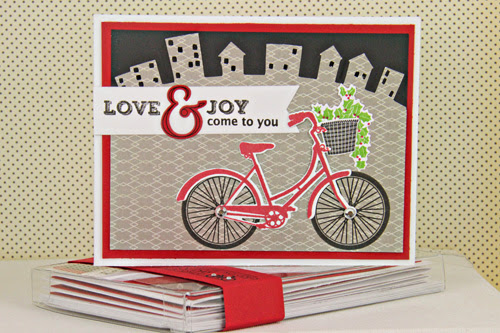 Here's the first one I'm sharing. PTI released Pedal Pusher in May this year. You probably weren't thinking Christmas at all back in the spring. But there is the most adorable holly and berry basket filler. Used all that here with the matching dies. The sentiment is from Come All Ye Faithful with a little Grand Ampersand stamps and dies thrown in for color. The city scene was cut on my Silhouette using an image from the extra folders from the New Year's Eve kit at SVGCuts. 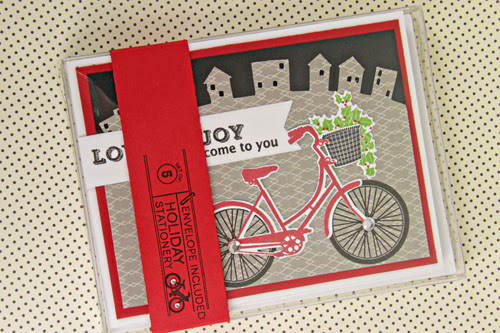 Everything is packaged up in a clear card box and wrapped with a cardstock band stamped with this set from Clear and Simple Stamps. I had a little room to add a matching bicycle from Kid Kudos on the label. I even added little rhinestones to the wheels, just like on the big bicycles on the card.

This little bicycle gift set has already flown the coop. Gave it away yesterday. I've already got another card set in the works, but focusing today on the upcoming PTI Release. Fridays are my days to work, hide out in the office, and catch up on all my television shows on my iPad. :) I'm so looking forward to it!
Posted by Erin at 6:57 AM